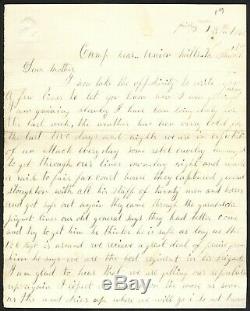 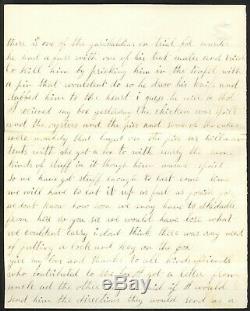 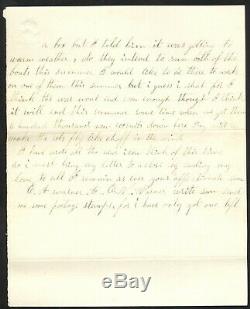 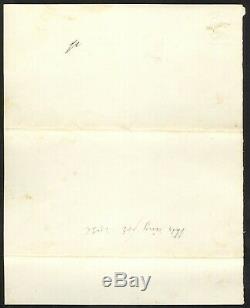 1863 and was penned from Camp near union mills Va. He states that we are in expectation of an attack everyday some rebel cavelry managed to get through our lines Monday night and made a raid to fair fax court house they captured general Stoughton with all his staff of twenty men and horses and got safe out again they came through the garabaldis piquet lines this is probably a reference to the 39.

New York Infantry, nicknamed the Garibaldi Guards. Though his regiment suffered under a bad reputation they had surrendered en masse at Harpers Ferry, Warner states our old general says they had better come and try to get him he thinks he is safe as long as the 126 Regt is around we receive a great deal of praise from him he says we are the best regiment in his brigade.

He then relates an interesting story there is one of the garibaldis on trial for murder he had a fuss with one of his tent mates and tried to kill him by pricking him in the tempel with a pin that wouldent do so he drew his knife and stabbed him to the heart i guess he will be shot. He writes of a package being received with spoiled food, though one of his tentmates received a box with the same type of food, but it wasnt spoiled. Near the conclusion, Warner observes that I think the war wont end soon enough though I think it will end this summer some time when we get them 6 hundred thousand new recruits down here they will make the rebs fly like chaff in the wind. This letter is signed your affectionate son / E.

Warner , followed by a request for stamps. While not filled with battle content, this letter is interesting for the veiled insults regarding the lack of vigilance of the Garibaldis, as well as the murder in the same unit. Further research may yield the case files for the court martial, and the official decision (was the soldier shot).

An interesting letter to add to a collection of soldiers correspondence, especially with a judicial tone. Cursory research indicates that Edgar A. Warner was 21 years old when he enlisted on July 31, 1862 at Canandaigua, New York. He was mustered in as a private in Company K, 126. New York Infantry on August 22, 1862.

He was captured with the majority of his unit at Harpers Ferry, Virginia on September 15, 1862, and paroled the following day. As noted earlier, the men were officially exchanged on November 22, 1862. Warner is listed as being wounded at the battle of Bristoe Station, Virginia on October 14, 1863, succumbing to his wounds two days later in Alexandria, Virginia. New York Infantry was mustered into Federal service on August 22, 1862 and was almost immediately sent to Virginia. They served in the defense of Harpers Ferry from September 12-15, with the unit surrendering on the latter date.

They were paroled the following day, and officially exchanged on November 22, 1862. They served in the defenses of Washington, D.

And at Centerville, Virginia until called to join the Army of the Potomac in time for the Gettysburg Campaign. Eager to display their bravery after their earlier surrender, the regiment fought with honor and tenacity at the battle of Gettysburg, sustaining over 220 casualties. The regiment participated in every major and numerous minor engagements from that time until the close of the war, including the Wilderness, Spotsylvania Court House, North Anna River, Cold Harbor, the Siege of Petersburg, Sailors Creek, and Appomattox Court House.

The regiment was mustered out on June 3, 1865. During its term of service, the 126. New York had 16 officers and 137 enlisted men killed or mortally wounded and 1 officer and 122 enlisted men who died of disease.

The presently offered letter exhibits signs of period use, as well as less than ideal long-term storage. Toning is present across the entire surface, significantly darker at the edges, at the back center, and along the folds (these are the portions of the letter most susceptible to toning and damage, since they are exposed even when the missive is folded for storage). The two horizontal folds have weakened the paper slightly, though no separations are present at this time. Several stains are scattered throughout the piece, a couple of which affect the legibility of the text.

The letter is accomplished in period ink on blue-lined white paper, though due to the poor storage, the ink has faded significantly (see illustration). The left edge is somewhat irregular, having been torn or cut from the second page (this has affected some of the text along the left margin). Apparently, Warner sent several letters home, as 19 is written in pencil on the first page (at the upper right). Letter measures approximately 5¼ x 6 inches. A very interesting letter with unusual content, worthy of inclusion in any Civil War letter collection, especially since the author paid the ultimate sacrifice.

If you have any questions regarding this item, please ask before purchasing. He has contributed to numerous reference books within the industry, as well as being a co-author of The Comprehensive Catalog and History of Confederate Bonds, 2. He is an authorized submitter to NGC, PCGS, and PMG, a diamond founding member of Coin Dealers Helping Coin Dealers and a supporter of the Industry Council for Tangible Assets.

American Coins and Collectibles can be found at many of the state and local coin shows. The item "1863 Civil War Union Soldiers Letter Edgar Warner, 126th NY (DoW)" is in sale since Friday, May 22, 2020.

This item is in the category "Collectibles\Militaria\Civil War (1861-65)\Original Period Items\Correspondence, Mail". The seller is "coin4u" and is located in Shreveport, Louisiana. This item can be shipped to United States.