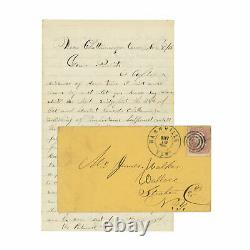 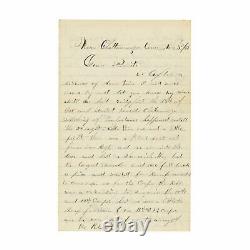 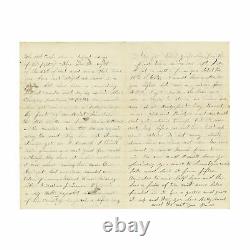 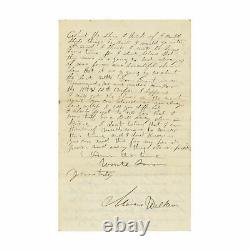 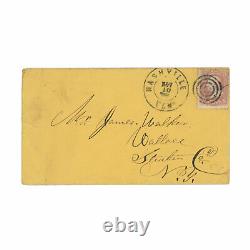 Private Marcus Walker of the 141st New York wrote this letter home to his parents in Steuben County on November 3, 1863. In it he describes the regiment's action at the Battle of Wauhatchie, the situation after the battle, and prospects for the end of the war. The 141st New York had joined the 11th Corps shortly after the Battle of Gettysburg and had transferred west with the 11th and 12th Corps in September, after the disastrous defeat at Chickamauga. Grant took command of the combined Union armies in southeast Tennessee and moved the 11th and 12th Corps west of Chattanooga to help secure the city's tenuous line of supply. The rebels tested that line on the night of October 28 at Wauhatchie Station, attacking a division of the 12th Corps there. The 11th Corps responded in support. We left Bridgeport the 27th of Oct and started towards Chattanooga. Nothing of importance happened until the 2d night. Then we had a little fight. There was a patrol sent out from our Regt.

And we run into the Rebs and had a skirmish. They had the largest number and we fell back a piece and waited for reinforcements to come up, or for the Corps. The Rebs was a calculating to surprise the 11th and 12th Corps, but we was a little too sharp for them (the 11th & 12 Corps are the ones sent from the Army of the Potomac). The 12th Corps done a biggest share of the fighting.

This was the night of the 28th of Oct and since that time we have not stayed 24 hours in a place, but have been a building breastworks and laying behind them, changing positions, &c. Of the situation after the battle he writes. We are in a Valley along the foot of Lookout Mountain. The Rebs shell us from their Batteries on the mountain when they see us a going along the road. They have not done any damage yet as I know of. I think their gunners are not good for much, although they have got a few as close as I care about having them come. Our Regiment had one man wounded and taken prisoner and seven missing, either killed or prisoners.

There is a big Battle expected in this part of the country somewhere before long. Walker then discusses the pressure rebel raids had put on Union supplies in the region. The Rebs have been a trying to starve us when we was up at Bridgeport they burnt some railroad bridges and we could not get rations through, but it was not long before we had them built up again.

Rations is not very plenty down here or have not been. We have learnt to make mush from corn in the ear and I will learn you providing you want to know (you or use) take and bail it from fifteen minutes to one half hour and then have a piece of tin with some holes punched in it for a grater and grate it up, and then you have bully meal, and the rest you know. He closes the letter discussing the prospects for an end to the fighting.

I don't believe that this war is a going to last always. If our forces are successful down here that is a going to be about the last battle. We are under Hooker, the 11th & 12th Corps. You can direct as you always have unless I tell you different. I like to forget to tell you that I was tough as a bull away down in Dixie.

The letter was written on four pages of a 4 3/4" x 7 1/2" bifolium letter sheet. It is in excellent condition with light foxing and toning. Creased at the original mailing folds.

The original stamped cover with Nashville postmark is included. The letter's transcript is below. Near Chattanooga Tenn Nov 3d / 63.

After a silence of some time, I will once more try and let you know my whereabouts. I got a letter from you dated the 15th of Oct. About the store, I think if I could shape things to suit I would go into it and I think I will be home sometime, for I don't believe that this war is a going to last always.

We are under Hooker, the 11th & 12th Corps. You can direct as you always have unless I tell you different. I don't believe that I can think of much more to write this time and I don't know as you can read this, for my pen is poor and everything else in proportion. Please see my other items for more interesting Civil War letters, documents, and images.