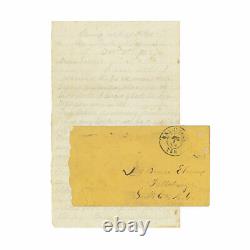 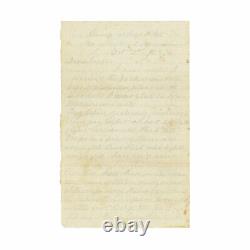 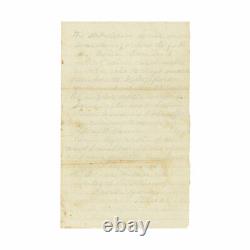 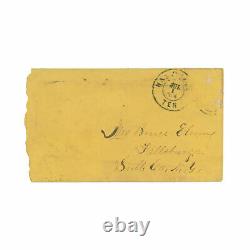 In this letter written October 31, 1863, Sergeant Bruce Elmore of the 143rd New York writes home to his wife about the regiment's casualties from the Battle of Wauhatchie, one of the few night battles to occur during the Civil War, in which Confederates under Longstreet failed to close the recently opened Federal supply line to Chattanooga. In the letter Elmore writes.

Day before yesterday morning, before daylight, we had a small fight hereabouts. The 11th & 12th Corps or a part of them were engaged. Our Regt was lightly engaged. Had 6 or 7 men wounded, one mortally.

Our Co had three men wounded, none of them dangerously, although all of them quite badly. Simpson wounded in the foot, Corp.

Hill in the leg, Benj. We are under marching orders to go in an hour. I'm in a hurry and can't write much; it's two days march from here to Bridgeport and we had to skirmish the night after we got here.

I don't know as I shall get any chance to send this. Of the three wounded men in Elmore's company, Conklin would survive and muster out with the regiment, Hill would be discharged for disability, and Simpson would die of his wounds at Nashville November 25, 1863. "Good courage is the word, " Elmore writes at the close of the letter. He would be promoted to first sergeant in October 1864 and would muster out with the regiment in July 1865. The letter was hastily written in pencil on front and back of a 5" x 8" letter sheet.

Very good condition with light foxing and toning. Included is an original postal cover addressed to Elmore's wife, but with a July 1, 1864, postmark it is not original to the letter.

The full transcript of the letter follows. Also one of late date. I was glad to hear that you were well.

Goodbye, write often and I will write as often as I can send them. Good courage is the word. We are within 4 or 5 miles of Chattanooga. Please see my other items for more original Civil War items.