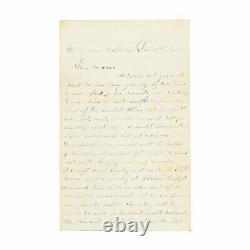 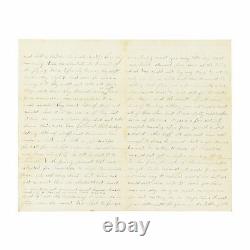 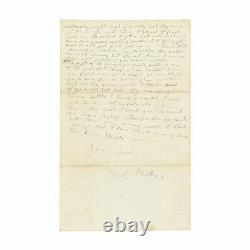 Private Marcus Walker wrote this letter home to his family on December 18, 1863. In it he covers events from late-November through mid-December, including the Battles of Lookout Mountain and Missionary Ridge, and their eventual march to relieve Knoxville. Walker opens the letter wearily, Since I last wrote we have seen some of the hardest times that the 141st ever had.

Of the beginning of the campaign he writes. Our operations commenced with the Battle of Nov. 23d and we just got back to camp last night, being gone almost 4 weeks.

We left camp Sunday and went to Chattanooga and on Monday at 2 o'clock the fight commenced. Our Corps, or rather part of it, was held in reserve and had to run from one place to another where they would be likely to want us the worst. Until Wednesday-then [the] men went clear to the left of the line and held a position in front until Thursday morning. Then we started in pursuit of the flying Rebs (for by the way they left Wednesday night) and was in such a hurry that they could not take all their things with them. They throwed away or left their guns, ammunition, wagons, supplies to a great extent.

They burnt lots of stuff and would have done so more if they had time. In some places they did not take down their tents. We followed them 2 days, taking lots of stuff and prisoners, then made a halt and held a gap until the 29th. Then abruptly the 141st had orders to march no one knew where.

It finally proved that we started for Knoxville to help Burnside clean out old Longstreet. " Approaching Knoxville, however, the rebels "skedaddled and so we turned around and came back, making a march of over 200 miles, and of all the marching I ever done this was the worst. He describes the difficult journey. I saw a few entirely barefoot marching upon frozen ground and I called it rather tough. It has not been cold enough to freeze the ground, but a few times we went to within 15 miles of Knoxville. We could not get a paper nor anything to hear from the rest of the army until we got back. We could not write for we did not have any material, and if we had we could not have sent it back for there was no way. So you must excuse me for not writing in so long a time. He adds further that he got a bad cold once and came very near nocking under, but finally got over it and feel first rate again. " He suspects "that we will go back to V[irginia] sometime this winter or next spring, but do not know. Walker closes the letter with words on the grandeur of an army "going into battle".

The sight of the army a going into battle is one of the grandest things I ever beheld. I wish you could [have] seen it. I think it would pay you to come down to Washington sometime and see the Army of the Potomac, and if you could tell when they was a going to have a battle, I know it would [pay]. The letter was written on four pages of a 5" x 8" bifolium stationery sheet. It is in excellent condition, lightly toned, with creases at the original mailing folds.

The full transcript of the letter follows. Camp near Chattanooga, Dec 18th 1863. Thinking that you might want to hear from your baby by this time, I will spend a few moments in writing to you. Since I last wrote we have seen some of the hardest times that the 141st ever had, and I will try and tell you something about them.

I would have written before, but I could not get a chance. Then we had orders to march no one knew where (if he did he kept it to himself). It finally proved that we started for Knoxville to help Burnside clean out old Longstreet, but when we got a most there he skedaddled and so we turned around and came back, making a march of over 200 miles, and of all the marching I ever done this was the worst. I rec'd your letter with the gloves on the battle field Wednesday night and you may bet they came just in the right time. I stood it first rate on the march.

I got a bad cold once and came very near nocking under, but finally got over it and feel first rate again. I think that we will go back to Va sometime this winter or next spring, but do not know. I don't believe that I can think of any more this time. Please see my other items for more interesting Civil War letters, documents, and images.