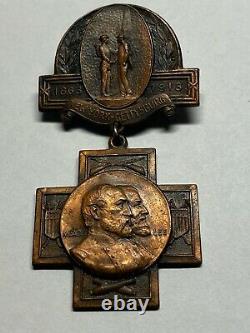 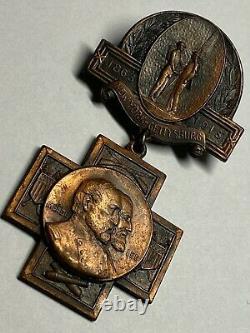 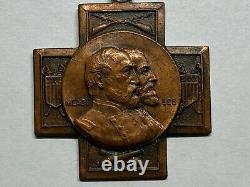 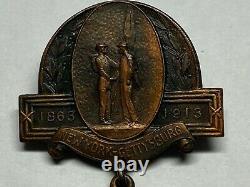 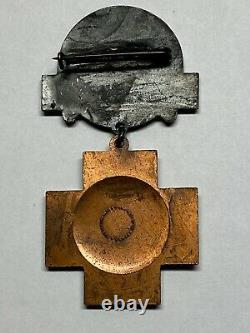 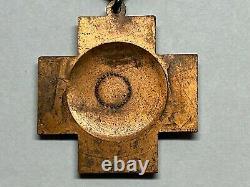 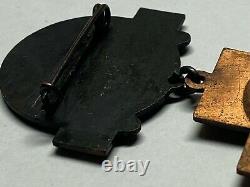 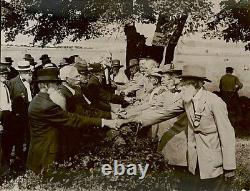 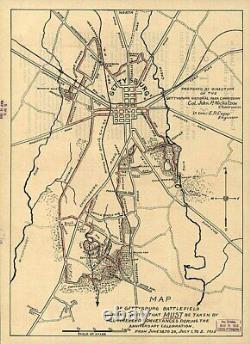 The largest combined reunion of Civil War veterans ever held occurred at Gettysburg in 1913. This is for the medal only. 2¾ in length, features a circular bronze relief of Generals Meade and Lee at center with flag and shields resting on crossed swords at either side. Above and below the bronze relief of Generals Meade and Lee are crossed rifles and crossed cannons. The medal is suspended beneath a bronze badge with oval relief of Confederate and Union soldier clasping hands with "1863" at left and "1913" at right, and wheat stalks surrounding.

Scroll beneath reads New York-Gettysburg. Pin back with open loop catch. The reverse is hallmarked THE WHITEHEAD & HOAG CO. The 1913 Gettysburg reunion was a Gettysburg Battlefield encampment of American Civil War veterans for the Battle of Gettysburg's 50th anniversary.

The June 29July 4 gathering of 53,407 veterans (8,750 Confederate) was the largest ever Civil War veteran reunion, and never before in the world's history had so great a number of men so advanced in years been assembled under field conditions. All honorably discharged veterans in the Grand Army of the Republic and the United Confederate Veterans were invited, and veterans from 46 of the 48 states attended. Despite official concerns that there might be unpleasant differences, at least, between the blue and gray the peaceful reunion was repeatedly marked by events of UnionConfederate camaraderie. President Woodrow Wilson's July 4th reunion address summarized the spirit: We have found one another again as brothers and comrades in arms, enemies no longer, generous friends rather, our battles long past, the quarrel forgottenexcept that we shall not forget the splendid valor. After numerous smaller Gettysburg reunions, including the 1906 Philadelphia Brigade/Pickett's Division reunion, during which Brig.

Huidekoper of Philadelphia suggested a 1913 50th anniversary reunion to Pennsylvania Governor Edwin Sydney Stuart. On September 8, the Gettysburg National Park Commission met with Gettysburg borough officials about the event, Stuart conducted a sub-committee meeting on October 25, and Stuart addressed the General Assembly on the matter in January 1909. On May 13, 1909, the Pennsylvania Assembly created the Fiftieth Anniversary of the Battle of Gettysburg Commission, and the commission's first tentative program of October 13, included a Peace Jubilee, with noon July 3 placement of the cornerstone for a Great Peace Memorial. Because the memorial funding was not approved, the Peace Jubilee plans were removed from the schedule. The site for the camp and the 8 acres for the Great Tent west of the Codori House were selected in 1912 and mapped by the Gettysburg National Park Commission.

The Pennsylvania commission headquarters at Gettysburg was at 231 Baltimore Street, with the Harrisburg office of the Secretary (later nicknamed the "Duke of Gettysburg") in Pennsylvania State Capitol Room 509. Various commemorative tokens and programs were developed for attendees, including three types of Pennsylvania badges ("PRESS", "GUEST", "SCOUT"), a commemorative medal, and a souvenir program of poems by the attending "Veteran Scout", Jack Crawford. The Pennsylvania Railroad Company added "a telephone line between Gettysburg and Hanover along the Western Maryland Railway, over which the Pennsy would operate a large number of trains during the battle anniversary". On the Chambersburg-Gettysburg turnpike and the Gettysburg-Petersburg turnpike, tolls ended in time for the reunion. On June 27, the Pennsylvania Supreme Court upheld the 1911 Sproul Roads Act, by which the Commonwealth acquired private toll roads and made them free for the public.

By February 1, 1913, water wells were being drilled for the July encampment, and by June 26 hotels in Hanover, Chambersburg, Hagerstown, and the Blue Ridge section were filling rapidly. For entertainment, a Gettysburg facility was started in 1912 to display the Boston version of the Gettysburg Cyclorama, and The Battle of Gettysburg black & white film of 1913 was first run at Walter's Theatre on June 26 (This film has since been lost). The item "1863-1913 CIVIL WAR REUNION MEDAL NEW YORK GETTYSBURG GENERAL MEADE & LEE" is in sale since Monday, January 18, 2021. This item is in the category "Collectibles\Militaria\Civil War (1861-65)\Civil War Veterans' Items". The seller is "bayern-landhaus" and is located in Fort Knox, Kentucky.