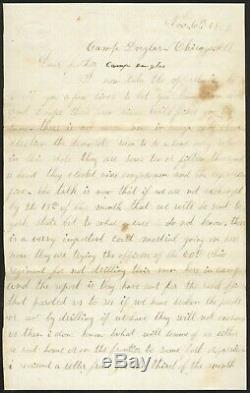 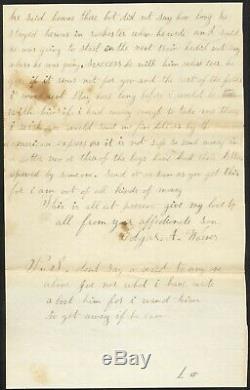 1862 Civil War Union Soldiers Letter Edgar Warner, 126th NY (DoW). Offered for your consideration is a short, Civil War letter, written by a soldier who paid the ultimate price. This letter is dated Nov. 1862 and was penned from Camp Douglas Chicago Ill , presumably while the soldier was fulfilling his parole (he had been captured with his regiment on September 15, 1862 at Harpers Ferry, Virginia). He opens the letter by letting his father know that he is fine, and he hopes that his father is as well.

He states that there is not much news except for the election results, in which the democrats seem to be a head every where in this state they are some ten or fifteen thousand a head they elected nine congressmen and the republican five. He expects to be exchanged soon, if not, they may be moved. He goes on to note that There is a verry important court martial going on here now they are trying the officers of the 60. This letter is signed your affectionate son / Edgar A.

Warner , followed by a short postscript. While not filled with battle content, this letter is interesting for the apparent dilemma surrounding what one can and cannot do when you are on parole.

Further research may yield the case files for the court martial, and the official answer to the question. The author and his unit did return to service, during which he would subsequently die of wounds (see below).

An interesting letter to add to a collection of soldiers correspondence, especially with a judicial tone. Cursory research indicates that Edgar A.

Warner was 21 years old when he enlisted on July 31, 1862 at Canandaigua, New York. He was mustered in as a private in Company K, 126. New York Infantry on August 22, 1862. He was captured with the majority of his unit at Harpers Ferry, Virginia on September 15, 1862, and paroled the following day.

As noted earlier, the men were officially exchanged on November 22, 1862. Warner is listed as being wounded at the battle of Bristoe Station, Virginia on October 14, 1863, succumbing to his wounds two days later in Alexandria, Virginia. New York Infantry was mustered into Federal service on August 22, 1862 and was almost immediately sent to Virginia. They served in the defense of Harpers Ferry from September 12-15, with the unit surrendering on the latter date.

They were paroled the following day, and officially exchanged on November 22, 1862. They served in the defenses of Washington, D. And at Centerville, Virginia until called to join the Army of the Potomac in time for the Gettysburg Campaign. Eager to display their bravery after their earlier surrender, the regiment fought with honor and tenacity at the battle of Gettysburg, sustaining over 220 casualties.

The regiment participated in every major and numerous minor engagements from that time until the close of the war, including the Wilderness, Spotsylvania Court House, North Anna River, Cold Harbor, the Siege of Petersburg, Sailors Creek, and Appomattox Court House. The regiment was mustered out on June 3, 1865. During its term of service, the 126. New York had 16 officers and 137 enlisted men killed or mortally wounded and 1 officer and 122 enlisted men who died of disease. The presently offered letter exhibits signs of period use, as well as less than ideal long-term storage. Toning is present across the entire surface, significantly darker at the edges, at the back center, and along the folds (these are the portions of the letter most susceptible to toning and damage, since they are exposed even when the missive is folded for storage). The two horizontal folds have weakened the paper slightly, though no separations are present at this time. Several stains are scattered throughout the piece, a couple of which affect the legibility of the text.

The letter is accomplished in period ink on blue-lined white paper, though due to the poor storage, the ink has faded significantly (see illustration). The left edge is somewhat irregular, having been cut from a second page (this has affected some of the text along the left margin). Apparently, Warner sent several letters home, as #7 is written in pencil on the back. The letter measures approximately 5 x 8 inches.

A very interesting letter with unusual content, worthy of inclusion in any Civil War letter collection, especially since the author paid the ultimate sacrifice. If you have any questions regarding this item, please ask before purchasing.

He has contributed to numerous reference books within the industry, as well as being a co-author of The Comprehensive Catalog and History of Confederate Bonds, 2. He is an authorized submitter to NGC, PCGS, and PMG, a diamond founding member of Coin Dealers Helping Coin Dealers and a supporter of the Industry Council for Tangible Assets. American Coins and Collectibles can be found at many of the state and local coin shows. The item "1862 Civil War Union Soldiers Letter Edgar Warner, 126th NY (DoW)" is in sale since Friday, May 22, 2020.