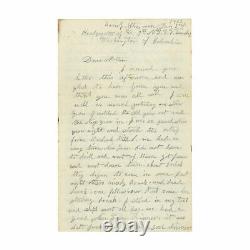 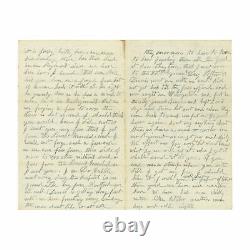 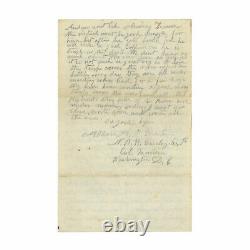 This letter was written by Private Harlan P. Martin in early January 1862 while his regiment, the 7th New York Cavalry, was stationed at Washington, DC. The 7th Cavalry existed only briefly.

It was organized in late 1861, but only ever mustered eight companies and the men were all discharged March 31, 1862. They remained at Washington throughout their short enlistment.

Martin, writing to his mother, first discusses watching "the old year out and the New year in" while on guard duty. On New Year's Day, he describes staying in camp while most of the other men got passes into the city.

About 3 o'clock they began to come in, some just right, others nicely drunk and dead drunk. One fellow in our tent come in staring drunk. I stayed in my tent and slept most all day.

We had a good New Years dinner. It was salt junk and beans, a good dinner. Martin then writes about another soldier forging a pass, and goes into a lengthy denial of his own involvement. I heard that Asa Park had gone home on a forged pass, but if he come back it will all be right. He generally does as he has a mind to when he is in the Regiment.

But as my forging a pass to cross the River is not so, and I should think you would know, I did not, as I sent you my pass that I got from the Provost Marshal, and I could not forge such a pass, and no one can pass from this side of river to the other without such a pass from the Provost Marshal as I sent you. He then describes unwelcome preaching in camp and an incident of soldiers overstaying their passes and spending time in two different guard houses. We have preaching every Sunday.

The men don't like it at all. They swear more to have to turn to hear preaching then all the good it does. The time that I went over to the 22nd Regiment Doug Potter & Dennis went over with me and they did not get back till the pass expired and were caught in Georgetown and put in the city guard house and kept 2 or 3 days and then let out, and when they came back to camp was put in the guard house again.

Don't say anything about this. Martin's brother was evidently about to enter the army. "Andrew won't like soldiering because the victuals won't be good enough for him, " he writes, but after he gets broke in he will make a good soldier, as he is tough as the devil. He closes the letter discussing news from across the Potomac. The troops across the river expect a battle every day. They are all under marching orders and for a few days they have been sending a good many troops across the river, and all the regiments this side of the River are under marching orders. The letter was written on four pages of a 5" x 8" letter sheet. It is in excellent condition with light foxing and toning. Creased at the original folds. The full transcript of the letter can be read below. Camp Stoneman Jan 2nd 1862. Headquarters of the 7th N. I received your letter this afternoon and was glad to hear from you and that you was all well.

I watched the old year out and the New year in. I was on guard New years night and stood the relief from 11 o'clock till 1. We had an easy time New Years.

Did not have to drill and most of them got passes and went downtown. It is pretty healthy here.

There has [been] three died in our Regiment since we have been here. The Hospital is on ground.

The boys from Hartford are all well. Dennis is getting along first rate. We expect our pay every day, but don't know what day we will get it.

When I get it shall send it to you. If you send me a stamp when you write till I get my pay I should like it. I wish you would send me a paper of..

We have nice weather here. We have had some chilly weather like October weather. Warm days and cold nights. Andrew won't like soldiering because the victuals won't be good enough for him, but after he gets broke in he will make a good soldier, as he is tough as the devil.

We don't hear as much about the war here as you do. It is not such a great cry as it have [been]. Write soon and write all the news. Please see my other items for more interesting Civil War letters, documents, and images.