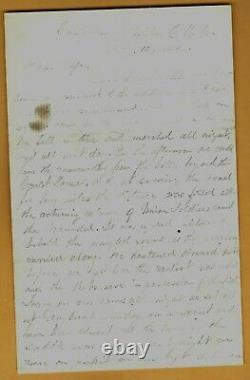 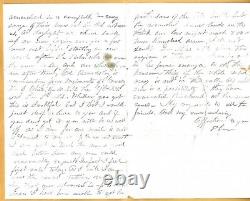 Sargent Buel and the 9th NY are on the fringes of the battle of 2nd Bull Run under General Pope with some good commentary. Letter from Sargent Ebenezer Buel of the 9th NYC, Camp near Culpepper C H Va, Aug 12 1862, Dear Wife Since I last wrote we have seen some of the soldiers life. I had never before experienced. Just after dark an order came for the Regt to march in an hour. We fell in line and marched all night and all day.

In the afternoon we could hear the cannonading from the battle beyond the Court House and at evening the road for four miles the distance was filled with the returning. Of Union Soldiers and the wounded.

It was a sad picture to behold the mangled forms as they were carried along. We hastened forward but before we got in the contest was ended and the Rebs were in. Laying on our arms all night we set out at daybreak Sunday on a scout and have been almost all the time in the saddle ever since. Last night we were on pickett on our left and men concealed in a cornfield in easy range of the guns but they did not fire at us?

At daylight we came back and are now laying over for a few hours just before starting on our march after the Rebs who are the same today and our whole are after them. Col Beardsly is commanding four regiments of cavalry the 8 Ohio, the 4 NJ the 9th NY and the 1st Md. Whether you get his is. In fact I feel first rate today. As I write I can hear the cannon rattling every away__ that are advanced is up to their fear?

I have been unable to get the particulars of the last battle but the wounded I saw lead me the thought our loss might reach 800 or ten hundred men. I do not doubt Gen Pope will give this region a thorough cleaning out he has force enough to do the handsome thing if the whole rebel army is out in the valley off where there is a possibility if they have evacuated Richmond not the ___. My regards to all for friends and my ever affection to you Ebe. Residence was not listed; 33 years old.

Enlisted on 11/4/1861 at Westfield, NY as a Sergeant. On 11/4/1861 he mustered into "B" Co. He was discharged on 2/27/1864. (Discharged to re-enlist in the general service). Sources used by Historical Data Systems, Inc. (c) Historical Data Systems, Inc. The item "1862 Civil War Letter Ebenezer Buel 9th NY Cavalry Culpepper, 2nd Bull Run" is in sale since Sunday, December 5, 2021. This item is in the category "Collectibles\Militaria\Civil War (1861-65)\Original Period Items\Correspondence, Mail". The seller is "civil_war_photos" and is located in Midland, Michigan. This item can be shipped worldwide.