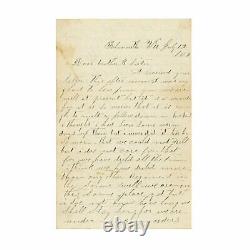 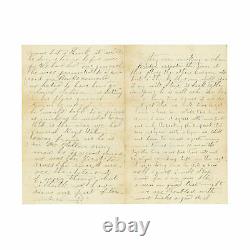 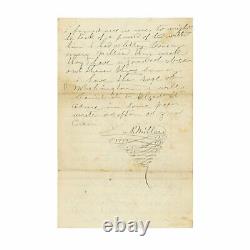 This July 1862 letter was written by Sergeant Samuel P. Millard (sometimes Milliard) of the 30th New York Infantry just six weeks before he would be mortally wounded at the Second Battle of Bull Run. The 30th New York was one of the several units organized in the summer of 1861 to serve a two-year enlistment term.

Both Samuel and his younger brother or cousin? Stephen had signed on at Eagle Bridge on the same day. At the time the letter was written, their regiment was at Falmouth, overlooking Fredericksburg as part of McDowells 3rd Corps of the Army of Virginia.

Millard writes that we have lost our general, brigade commander General Christopher Augur, who was promoted to a command in Bankss command, adding that we hated to have him go. He notes that this was also how General Erasmus Keyes was taken away from us. The letter includes several familiar soldier complaints, such as we have drilled more than any other Regiment in the Service and We are troubled with wood ticks a good deal. I found one on my tonight. He took a pound of hide with him. Millard writes that Steve is back to the company and is well as he has been in a long time. Reflectively, he writes I guess if we do not get shot we shall live to get home. Sadly it was not to be, as he received a mortal wound at Second Bull Run, eventually dying of his wound in November 1862. His brother Stephen is listed as being absent from a military hospital at the time of the 30ths muster-out. The letter was written on four pages of a 5 x 8 bifolium sheet. It is in very good condition with light foxing and toning. Creased at the original mailing folds. The letters full transcript follows. Falmouth Va July 12 / 62. I received your letter this afternoon. I was very glad to hear from you. We are well at present but it is a wonder, for it is so warm that it is enough to melt a fellow down in his tent. I thought I had seen some warm days up there but I never did. It has been so warm that we could not drill, but I do not care for that for we have drilled more than any other Regiment in the Service. Well we are in the same place yet, but I do not know how long we shall stay here for we are under marching orders now, but I think it will be some time before we go. We have lost our general. He was promoted to a command in Bankss command.

We hated to have him go. Colonel Sullivan is acting in his place. General Augur, he was a fine man. He would talk to a private as quick as he would to ours.

That is the way we had general Keyes taken away from us. He is in McClellans army now. He is a good general.

We was the first to cross the river & we are the tail end of everything, but I think we have done our part of the marching. They are making a chain bridge across the river at this place. The others has gone off but I think this one will stand if any will. Steve is back to the company. He is well as he has been in a long time.

I guess if we do not get shot we shall live to get home. I have been as tough this summer as ever I was. It agrees with me first rate, only the backing the knapsack, that does not agree with. I hope we shall not have to move a great many more times in our 10 months. By the time we are free there will not be a good company left in the regt.

It is a long time to look ahead. I was a guard last night. We are troubled with wood ticks a good deal. I found one on me tonight. I had a letter Cousin Mary Millard this week they have a good deal of rain out there through summer. I have the rose of Washington. I will send it to Elizab. It came in some paper. Write as often as you can. Please see my other items for more interesting Civil War letters, documents, and images.