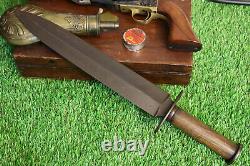 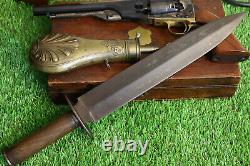 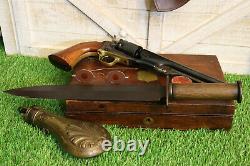 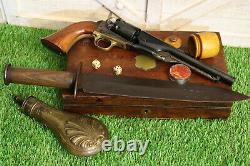 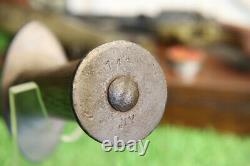 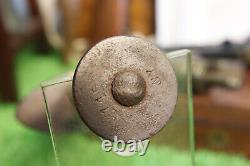 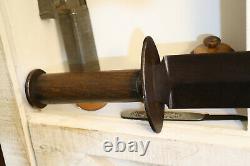 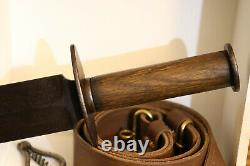 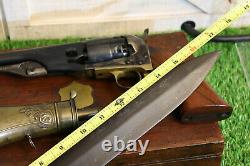 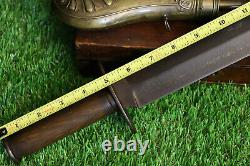 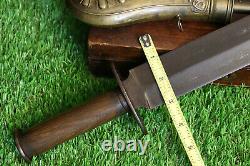 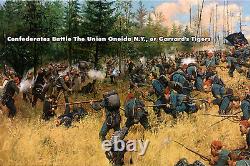 "RARE" 1861 Civil War Confederate Wilhoite Bowie Knife Madison County, Sword 17. I do accept partial trades. Please review all photos as they are crystal clear. This Confederate Spear point Bowie knife was captured by The Union's 146th Regiment, known as the 5th Oneida N. One of several very scarce American Civil War Confederate Only Bowie Knives to exist being made for individual soldiers.

Early war southern ambrotypes and tintypes provide us a with a dizzying array of large, wicked, and sometimes comical fighting knives of all descriptions, usually made by local blacksmiths for the southern boys of 1861 to take to war. Over the years, the majority of these local knife makers have remained anonymous, although sometimes certain traits and characteristics of surviving knives can help us to make general statements about the likely region or state that an unmarked knife may have originated in. More recent scholarship has allowed us to identify some knives as to their maker, even though they bear no markings. The classic southern fighting knife was usually overly large and robust, with an overall length that was typically between 12 and 24 and with blades that varied from about 8 to over 18! This knife is one of those rarely encountered examples of a locally made, and unmarked Confederate fighting knives whose maker and history has been identified. This knife is the work of Benjamin Wilhoite of Madison County, Virginia. According to the research on Wilhoite published in The Confederate Knives of Madison County by Harold Woodward Jr. And used in Confederate Bowie Knives by Josh Phillips, John Sexton & Jack Melton, Wilhoite established his blacksmith shop in Wolftown, Virginia, a village located about half way between the county seats of Madison and Greene. Wolftown is located about 30 miles east of Harrisonburg, VA and about 30 miles north of Charlottesville, VA, just on the other side of the Blue Ridge Mountains from Harrisonburg. According to Woodward, Wilhoites blacksmith shop included three forges, and was 40x28. Woodward further notes that three slaves assisted Wilhoite in his labors, but no slaves are listed as being owned by Wilhoite in the 1860 Census. According to the 1860 Census Wilhoite (spelled Wilhoit in the census records) is listed as a blacksmith, 48 years old with an estimated birth year of 1812.

The census lists the other household members as his wife, Eunice (45) and four children: Benjamin W (male, 15), David S (male, 14), Jeme Mc (male, 11) and Betty K (female, 7). Further investigation into the Confederate Citizen Files(National Archives Record Group 109 / M346) reveals that with the coming of the Civil War, Wilhoite did business with the Confederate government, but as a blacksmith supplying horse shoes, nails and shoeing services, or as a source for supplies and fodder such as wood and hay. No mention in the 20 or so pages of records includes knives.

However, wonderful research by Woodward and others who have family knives made by Wilhoite and passed down since the Civil War have allowed us to identify his work and for some of the units he made knives for. Research indicates that men who served in five different locally organized units carried knives made by Benjamin Wilhoite. These units include the Greene Rough & Readies Captain St.

The Type I knife was the basic enlisted mans knife and two identified examples exist, both identified to Greene county Confederate soldiers. Three of the Type II or Officers Knives exist that are identified to officers who served with some of the above listed units. Finally a single example of a Type III knife is know, which is substantially different from the other knives, and was given to William Simms of Company F, 13th VA Infantry.

It is believed that Simms, a tinsmith, made the scabbards for Wilhoites knives and received this special double D-guard knife as a token of appreciation for his work for Wilhoite. In general they have extremely well made spear point blades of a quality that suggests Wilhoite was a skilled cutler in addition to being a blacksmith. The consistent quality in the blades overshadows the typical work of a blacksmith who was not well versed in blade making.

The blades are all slightly hollow ground and tend to be slightly over 2 wide at the widest point, with a well-defined median ridge down the middle of the blade. The blades are fairly thick as well, normally around.

40 at the ricasso and around. 30 along the median ridge above the ricasso. The blade lengths vary to some degree, with the published examples of enlisted (Type I) knives varying form 11 to 13 and the officer (Type II) knives varying between 11 3/8 and 12 1/8.

The massive 18 blade of the single Type III knife owned by Simms is probably an exception to the way. Wilhoite constructed fighting knives and is certainly atypical. The guards are of iron. The hilts are typically of hickory and on the enlisted knives are secured with an iron, washer-style, pommel cap that is threaded on to the tang. It is generally believed that General George Armstrong Custer was directly responsible for putting Wilhoite out of business, as a troop of cavalry under Custers command burned Wilhoites shop on February 29, 1864, while raiding up and down the Shenandoah Valley, and near by areas.

As noted above, no receipts for knives are found in the Confederate Citizen Files, only for general blacksmithing and supplies. This example of the Madison County, Virginia Enlisted (Type I) Fighting Knife is in about FINE overall condition and is a wonderful example of a scarce, well documented, and known maker Confederate knife. This suggests that about 11 +/- was the preferred length for a Wilhoite blade, with the one enlisted knife that has a 13 blade being an aberration.

The knife blade has been lightly cleaned and has a medium pewter patina. The blade shows scattered patches of light pitting along its length.

There is some dark, oxidized discoloration in the pits that are present on the blade. There is also scattered roughness on the iron surfaces of the guard and pommel cap from surface oxidation and age.

The hickory grip remains in very nice condition. With the a beautiful dark grain wood, all of which appear solid and stable.

The wood grip remains solidly attached to the blade and tang, with no looseness. The grip does show the expected bumps, dings and mars from carry and use, but no abuse what so ever. Overall this is simply a wonderful, completely correct and authentic known maker Confederate Fighting Knife.

The knife is in very nice condition, and has great eye appeal. Rarely can an unmarked, locally made, Confederate blacksmith fighting knife be identified and so well documented. The fact that Wilhoites knives have been so well researched and have a seven-page section dedicated to them in the Phillips book underscores their importance. 146th Infantry Regiment Civil War. Halleck Infantry; Fifth Oneida; Garrard's Tigers.

11, 1862, for Washington and in November, joined the Army of the Potomac at Snicker's gap, Va. Where it was placed in Warren's (3d) brigade, Sykes' (2nd) division, 5th corps, a division chiefly composed of regulars. It marched with this command to Fredericksburg, where it fought its first battle, losing 1 mortally wounded and 17 missing or captured. At Chancellorsville the regiment suffered heavily on the first day of the fight and acquitted itself with honor, losing 50 killed, wounded and missing, and at Gettysburg it again fought gallantly, losing 28 killed and wounded. Garrard was made brigadier-general for gallant conduct at Gettysburg.

The regiment participated with little loss in the subsequent Virginia campaigns, ending with that of Mine Run, being present at Rappahannock and Bristoe Stations. Fox in his account of this regiment says: The regiment encountered its severest fighting at the battle of the Wilderness, May , 1864, where it suffered a terrible loss, not only in killed and wounded, but in captured men. Curran were killed in that bloody encounter, while the total loss of the regiment was 20 killed, 67 wounded and 225 captured or missing. In 865, the regiment was in Winthrop's (1st) brigade, Ayres' (2nd) division, and was prominently engaged in that command at the battles of White Oak road, and Five Forks, Gen. Winthrop being killed in the latter engagement while leading a successful charge of the brigade.

The 146th was well drilled and at one time wore a conspicuous Zouave uniform. Joseph Hayes, its last brigade commander, in taking leave of the regiment wrote: associated for a long time with the infantry of the regular army, the 146th yields the palm to none'. The regiment took part in a number of important battles among which were Fredericksburg, Chancellorsville, Gettysburg, Williamsport, Md. Wilderness, Spottsylvania (including the engagements at Piney Branch Church, Laurel Hill and Gayle's house), North Anna, Totopotomy, Cold Harbor, siege of Petersburg, Weldon railroad, White Oak ridge and Five Forks. It was also present at Rappahannock Station, Bristoe Station, White Oak swamp, Poplar Spring Church, Hatcher's run and Appomat-tox, the loss in the final Appomattox campaign, being 65 killed, wounded and missing.

Grindlay, the regiment was mustered out near Washington, D. Its total enrollment during service was 1,707, of whom 7 officers and 126 men were killed and mortally wounded; 2 officers and 187 men died of disease and other causes, a total of 324, of whom 1 officer and 87 men died in the hands of the enemy. Measurements and condition are provided in my high resolution photos..

Please view photos closely; all photos are taken with a high resolution studio camera which is also my description. I do keep on all my swords, knives and antiques preserved with a very light natural non build up oil placed in a non humid, non smoking controlled environment. Props Not Included, "Only This Bowie Knife" Is For Sale. If you have any questions please feel free to contact me. This is the real deal and not one to miss.. Once again please review my high resolution photos for details and condition. If my item for sale has any defects they will be shown in my photos and noted in my description as well.

This item is in the category "Collectibles\Militaria\Civil War (1861-65)\Original Period Items\Edged Weapons". The seller is "contractor-usa" and is located in Tallahassee, Florida. This item can be shipped to United States.