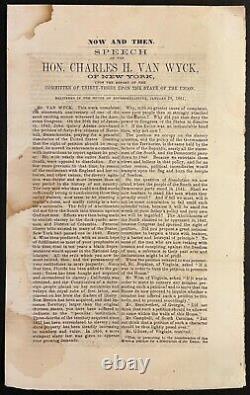 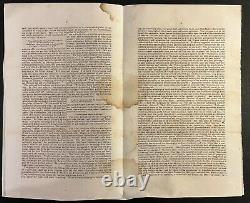 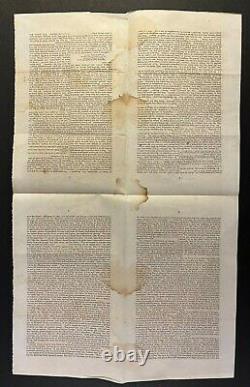 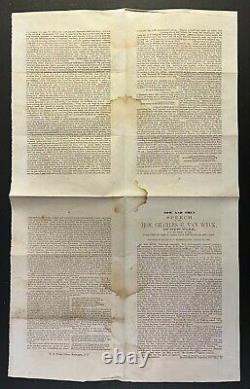 RARE ANTI-SLAVERY SPEECH AT THE DAWNING OF THE CIVIL WAR, LIKELY CONTRIBUTING TO THE SECOND ASSASSINATION ATTEMPT AGAINST THE AUTHOR. RARE ANTI-SLAVERY SPEECH GIVEN AT THE DAWNING OF THE CIVIL WAR, BY HON. VAN WYCK, US CONGRESSMAN FROM NEW YORK, WHO WOULD GO ON TO SURVIVE 2 ASSASSINATION ATTEMPTS, RISE TO THE RANK OF BRIGADIER GENERAL IN THE UNION ARMY, AND SURVIVE BEING WOUNDED IN BATTLE. Single sheet folded to form 8 pages, uncut & unopened. An impassioned argument against the evils of slavery and the treasonous acts taken by the Southern states, in which he references the 1850 Fugitive Slave Act, the English and American Abolitionist movements, Abraham Lincoln, Sumner et al.

After his first term as a New York Congressman, he joined the Union Army during the American Civil War. Initially commissioned as a colonel, he was brevetted a brigadier general in 1865 for his services. He survived at least 2 assassination attempts, both thought to be the results of his abolitionist fervor and vocal critique of slave owners. This item is in the category "Books & Magazines\Antiquarian & Collectible".