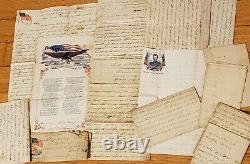 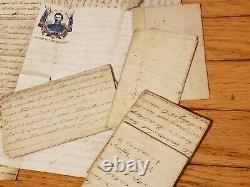 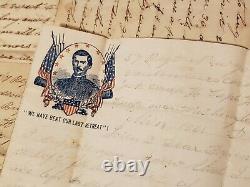 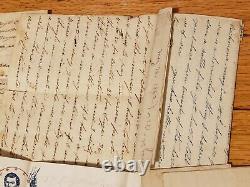 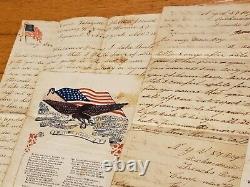 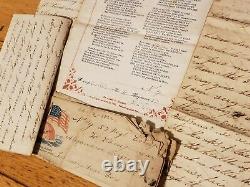 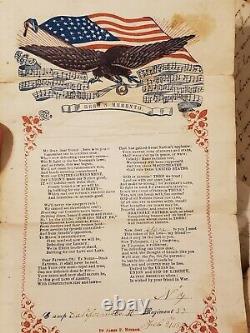 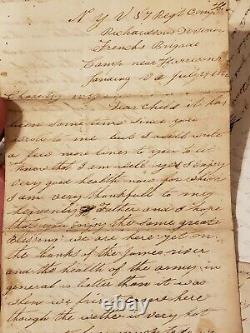 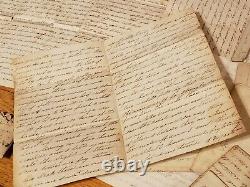 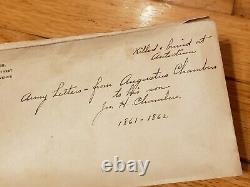 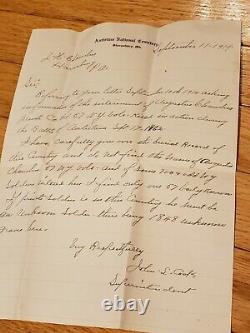 Fantastic estate fresh archive of thirteen Civil War era letters written between 1861 to 1862 by Private Augustus Chambers of the New York 57th Infantry Regiment. The 57th was involved in many battles during the war, including the Battle of Antietam in which Private Chambers was killed; he was buried at Antietam. Included is a 1914 letter from the superintendent of the Antietam National Cemetery informing J.

Chambers, son of Augustus Chambers, that he could not locate Chambers grave in the cemetery, but there are 1,848 unknown soldiers buried there. All of the Civil War letters were written to J. Most of the letters are two or three pages long. Here are some excerpts from some of the letters to give an idea of the content.

May 26, 1862 at Yorktown, Virginia :... When I became so sick I could not march any longer I was then put on board one of the Hospital boats loaded with sick and wounded.

We was sent up to Columbia 30 miles above west point where we lay 4 days then was brought to this place when we landed here. I was most starved I was so weak I could hardly walk for all I got to eat on the boat was 3 spoons full of beans and a small piece of salt beef. There was plenty of hard crackers but then I could not eat. I happened to have a little bread and cheese in my haversack which kept me alive... Shanty has been turned to Hospitals and are full and there is a good many very sick ones among us...

I have a good chance to view the rebel works and they are wonderfull if could not make a stand here I do not when they can. A negro came here the other day had a run away from Richmond and he says this is much the strongest fortified place... I cannot tell when the war will come to a close now but perhaps the taken of Richmond may end it.

I hope so for war is a horrible thing. August 25, 1862 at Newport News, Virginia :... We left our camp at Harrison's Landing on the 16th and arrived here last Friday the 22nd marching all the way a distance of 30 miles.

We crossed the Chickahominy River on a pontoon Bridge. This seemed like a slender Bridge for such a large army to pass over with all its wagons and artillery but all got over safe but one team of mules. They run off and was all around the driver got out. We passed through Williamsburg and over the Battle ground of last april and also through Yorktown where we rested a part of a day and a night. About one half of the army took the Boats there but Sumners corps was sent here to take the Boats and have been getting on Board as fast as they can.

3 Regt of us and are laying at anchor waiting further orders. December 21, 1861 at Horner Camp near Alexandria, Virginia :... We was all ready for a march to meet the rebels in a few minutes. Two or three regt hurried off but our Col. Was sick + we did not go. They came back in the morning without seeing any thing of the enemy. You may think that we was glad that we did not have to go but we was not we was ready + willing to go + are at any time.

We know that we can whip them because we are right + they are wrong. We have been amused several times by the balloon ascensions which take place near our camp. October 22, 1861 at Camp Morgan at Long Island :... Quite amusing incident occurred today while eating dinner. An elderly woman and her daughters entered the building marched up aisle til they came to a lad about 17 years old took him by the Collar and marched him out of the house mid the cheers and shouts of the hundreds of soldiers.

But soldiers must get used to hardships. We are willing to endure all these things for the sake of our glorious union. I have no doubt but that we shall be victorious and the stars and stripes shall wave again over every state. Conquer we must for our cause it is sure and this is our motto in god we will trust. Being the nearest landing place to Yorktown which place is strongly fortified by the rebels and a big force of them there. General McClellan was near there too with a good army and our brigade was to reinforce him. We have been expecting a big battle for 2 or 3 days. We are encamped about 8 miles from the town waiting for further orders. It is said here that Yorktown is all surrounded by union troops so they will have to fight or be taken prisoners...

We went about 20 miles below Manassas and run the rebels across the???? River and captured several prisoners. One of them was of the black horse cavalry that was in the Battle at Bulls run. He was a fine looking fellow and said he would not take the oath if they sent him to hell.

The rebels burned and destroyed all before them that they had time and when they got over the bridge set that on fire but our army captured 200 beet cattle that they had not time to get over. August 4, 1862 at Frenchs Brigade, Virginia :... A few months more will sleep by then the war will be over. I think like you that the north will come out all right that the rebels will be subdued and the union saved though many may be slain. I have a sure trust in God that all will be alright in the end and I feel too that he protect and deliver me in the hour of danger and bring me sage home to you again...

The rebels do not trouble us much now. The other night however they commenced about 1 o'clock to shell some of our camps and boats from the other side of the river. There was quite an excitement for while. The shells from their artillery and our gun boats flew like streaks of lightning through the air but the shells from our gun boats was too hot and too big for them and soon put them to silence and made them leave... The next morning a Brigade of our forces went over the river to see after them but they could not be found.

They then burned a fine House and Barn behind which the rebels had one of their Batterys and all has been quiet since. [This letter is 4pgs but is missing pages at the end]. The item "1861-62 New York 57th Reg Killed at Antietam Battle Civil War Letter Archive" is in sale since Friday, October 30, 2020.

This item is in the category "Collectibles\Militaria\Civil War (1861-65)\Original Period Items\Correspondence, Mail". The seller is "nutfieldantiques" and is located in Windham, New Hampshire.