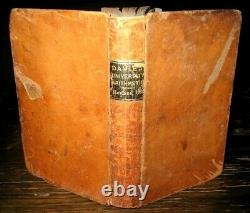 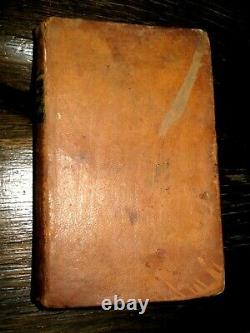 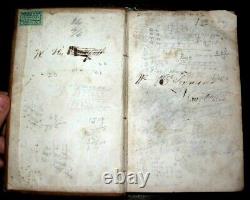 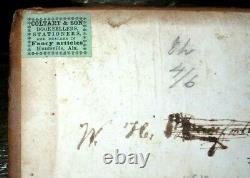 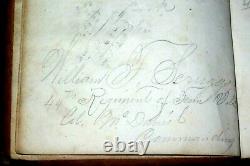 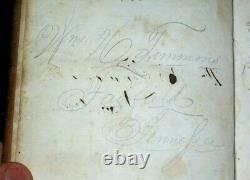 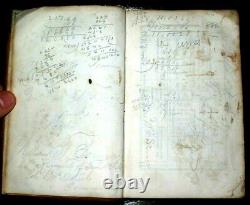 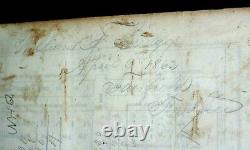 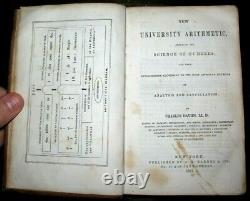 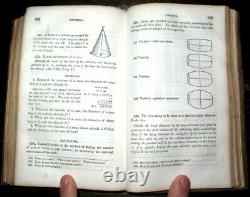 THIS BOOK WAS CARRIED BY CONFEDERATE HANDS THROUGH THE BATTLE OF SHILOH DURING THE CIVIL WAR! TIMMONS, ALSO OF HUNTSVILLE, WENT ON TO FIGHT THE CONFEDERATE CAUSE WITH THE 44TH TN INFANTRY. A MAN IN THE SAME REGIMENT, PRIVATE WILLIAM F. SCRUGGS OF FAIRFIELD, TN, RECEIVED THE BOOK AT SOME POINT, AND NOTED HIS REGIMENT, THE'44TH REGIMENT OF TENNESSEE VOLUNTEERS, COL.

MCDANIEL COMMANDING', AND NOTED ON THE FOLLOWING PAGE THE DATE, APRIL 6TH, 1862, THE DATE OF THE FURIOUS BATTLE OF SHILOH! THE 44TH LOST 3/4 OF ITS MEN AT THIS BATTLE, COL. MCDANIEL WAS INJURED BUT IT APPEARS THAT TIMMONS AND SCRUGGS SURVIVED, SCRUGGS KEEPING THE BOOK AS A MEMENTO OF HIS SERVICE. Timmons lost his sisters and parents at a young age. Finch's sister, Nancy, was married to William Danforth.

Danforth's signature appears at the front of the book, scribbled out by young Timmons who likely received the book to learn from his aunt some math as a teenager. Timmons signs the book in multiple places, and Scruggs also signs in front a few times, as shown. A relic of old Huntsville, AL, the book contains a rare printers ticket in front, Coltart and Sons, Booksellers, Stationers and Dealers of Fancy Articles, Huntsville, Ala. A southern relic with amazing Ciovil War ties. Book remains in good shape, the leather nicely kept with light wear at the edges and extremities.

It was printed in NY by A. Barnes in 1857; written by Charles Davies, and contains an illustrated frontis and many in-text illustrations. Some staining and lots of early math work, the book is complete and in good shape, as shown.

Some of the companies bore different letters in the interval between the first consolidation and the final organization with election of regimental officers. The letters shown are those used after the final reorganization. Shortly after organization the regiment moved to Camp Hardee, Bowling Green, Kentucky, where it was placed in Brigadier General S. Woods Brigade, along with the 7th Alabama, 5th, 7th, 8th, and a battalion from the 9th Arkansas Infantry Regiments, and the 3rd Mississippi Infantry Battalion.

Following the fall of Fort Donelson February 16, 1862, the brigade fell back through Nashville to Murfreesboro, where on February 23, 1862, the brigade was reported as composed of the following units: 7th, 16th Alabama, 8th Arkansas, battalion from 9th Arkansas, 27th, 44th, 55th Tennessee Infantry Regiments, the 3rd Mississippi Battalion, two batteries, and Averys Georgia Cavalry. The brigade was placed in Brigadier General Gideon J.

Pillows Division, but shortly Brigadier General T. Hindman took command of the division. As part of this division the brigade was engaged in the Battle of Shiloh April 6-7, 1862. General Wood, in his report, stated the 44th entered the battle with 250 muskets. Doctor Noblitt, Assistant Surgeon for the regiment, said in his account in Lindsleys Annals , that the 44th entered the engagement with 470 men in line, and at roll call Tuesday morning, April 9, 120 answered to their names.

Colonel McDaniel and Lieutenant Colonel Shied were both wounded, and Major Johnson had been absent from the regiment for some time because of illness. As a result, on April 18, 1862, the 44th was permanently consolidated with the 55th (McKoins) regiment which had also suffered heavy losses, to form the 44th Tennessee Infantry Regiment Consolidated, or the 44th Tennessee Infantry, 2nd Organization. Field officers appointed by General Hardee were Colonel John H.

Fulton, of the 44th, was elected to. Replace Colonel Kelly, but McEwen was continued as lieutenant colonel and Ewin as major. Major Ewin was mortally wounded at the Battle of Murfreesboro December 31, 1862, and Captain G.

Crawford succeeded him as Major. One company report stated Andrew Ewing was chosen major, and Doctor Noblitt listed William Ewing, but it is believed these were errors, as no Ewing was found in the muster rolls of the 44th Consolidated Regiment, and it is believed Henry C. Ewin is the correct name. On April 26 the 44th Consolidated was reported with 489 electives, in Woods Brigade, composed of the 16th Alabama, 8th Arkansas, 33rd Mississippi, 27th, 44th Tennessee Infantry Regiments, Averys Georgia Dragoons, and the Jefferson Light Artillery.

The brigade fell back to Tupelo May 29; moved from Tupelo on July 27 for Chattanooga, where Brigadier General Bushrod R, Johnson took command of the brigade which was placed in Major General Simon B. It moved up through the Sequatchie Valley for General Braggs invasion of Kentucky; was present at the surrender of Munfordville, Kentucky; and engaged at the Battle of Perryville, October 8, 1862. At this time, the brigade consisted of the 5th (9th) Confederate, 17th, 23rd, 25th, 37th, and 44th Tennessee Regiments, plus Dardens Battery.

In the Battle of Murfreesboro, December 31, 1862, Johnsons Brigade was in Major General Pat R. Cleburnes Division, and had been increased by the addition of the 25th Tennessee Regiment. The 44th reported 509 men engaged, 174 killed, wounded and missing, including 19 out of 28 officers. The regiment went into winter quarters at Tullahoma, remained there until April 22, 1863, when it moved to Wartrace; from there on May 24 to Fairfield; and at Hoovers Gap June 24-25, 1863 was in Major General A.

Hardees Corps as it fell back in July from Tullahoma to Chattanooga, and the 44th was stationed around Loudon and Charleston until early in September. At Loudon, on July 12, 1863, General Johnson reported that 104 men from the 44th had been left in Middle Tennessee by desertion and otherwise. From Charleston the regiment moved to Chickamauga, Georgia on September 8, and was engaged in the Battle of Cbickamauga September 19-20, 1863, as part of General Johnsons Provisional Division.

Here Colonel Fulton was in command of the brigade, and the 44th reported 113 casualties out of 294 engaged, including Lieutenant Colonel McEwen who was wounded. Prior to the battle 56 barefoot men had been sent to the rear. On October 31, at Cherokee Springs, still in Stewarts Division, the brigade was reported as composed of the 17th/23rd, and 25th/44th Tennessee Regiments. Here began a field consolidation with the 25th which was to continue for the duration, although separate muster rolls were maintained. On November 22, the brigade was transferred to Buckners Division, Lieutenant General Longstreets Corps, for the invasion of East Tennessee.

On November 30, the 63rd Tennessee was reported as a member of the brigade, and these five regiments constituted Johnsons Brigade until the consolidation of Johnsons and Archers brigades in January 1865. The 44th was present at the assault on Fort Sanders, Knoxville, November 29, 1863; moved to Rogersville; fought at Beans Station December 14; moved to Morristown January, 1864; to Dandridge January 15; to Lick Creek February 29; to Midway March 1; from Midway on March 28 to Greeneville, to Jonesboro, to Zollicoffer (now Bluff City), to Vances Store; to Abingdon, Virginia; left Abingdon April 22 for Richmond; fought at Walthall Junction, Swift Creek and Drewrys Bluff in May, 1864; at Petersburg June 15; and on June 18 was in the trenches outside of Petersburg.

In May, 1864 it had been transferred to Beauregards Department of North Carolina and South Virginia, Major General Robert F. Hokes Division, with Colonel Fulton in command of the brigade. On May 9, 1864, 125 men from the 44th, under Lieutenant Francis M.

Kelso, were detailed to man the heavy artillery at Fort Clifton, and engaged in a battle with Federal gunboats which they drove off with considerable damage. On May 16, at Drewrys Bluff, Lieutenant Colonel McEwen and Major McCarver were mortally wounded, and command of the 25th/44th fell upon Captain William N. In this engagement, he reported 95 casualties out of 250 electives engaged.

Major Crawford also later died of wounds received here. On June 16, Lieutenant Kelso and his company captured a number of prisoners and three stands of colors, but on June 22 the colors of the 44th were captured by the 48th Pennsylvania Infantry at Petersburg. On June 30, Colonel Fulton was struck by a shell, and mortally wounded. Company reports show the regiment at Signal Hill, Virginia, August 13, 1864; stationed at Chaffins Farm September and October; near Petersburg November-December, 1864. No further details of the regiments activities were found, but in January, 1865, Johnsons and Arcbers Brigades were consolidated under Colonel (later brigadier general) William McComb, formerly of the 14th Tennessee.

The lst Confederate, 7th and 14th Tennessee Regiments, and the 2nd Maryland Battalion were the additions which formed the consolidated brigade. On February 28, 1865 Captain Jonathan E.

Spencer was reported in command of the 25th/44th. The regiment, as part of this brigade, Major General Heths Division, Lieutenant General A. Hills Corps, was surrendered and paroled with Lees Army at Appomattox Courthouse April 9, 1865. MORE ON TIMMONS AND DANFORTH HERE. The item "1857 CIVIL WAR Confederate SHILOH BATTLE Prize MATH BOOK 44th TN Scruggs SIMMONS" is in sale since Monday, September 6, 2021.

This item is in the category "Books & Magazines\Antiquarian & Collectible". The seller is "mantosilver" and is located in Spencerport, New York. This item can be shipped worldwide.