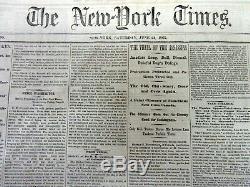 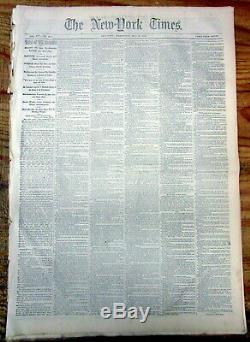 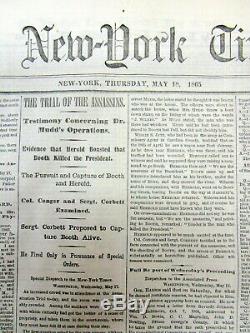 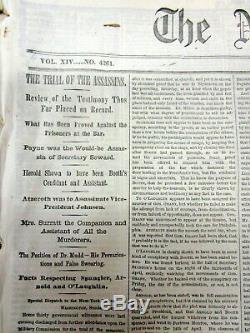 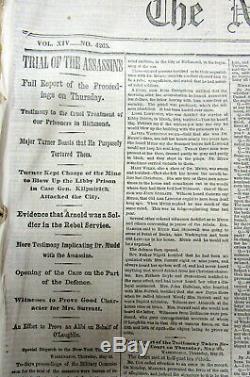 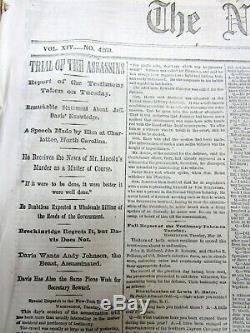 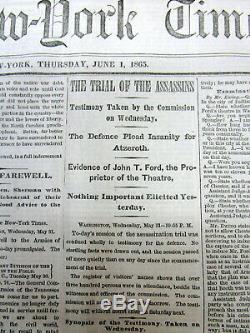 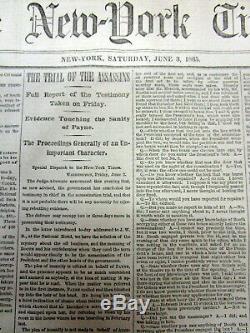 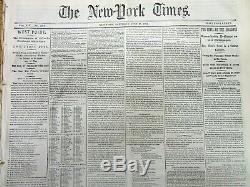 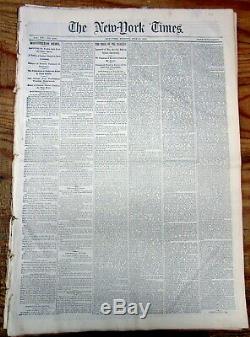 Lot of 15 1865 New York Times CIVIL WAR newspapers with front and inside-page headlines and long detailed word-for-word reports on the compelling TRIAL OF the ABRAHAM LINCOLN ASSASSINATION CONSPIRATORS - inv # 5R-244. SEE PHOTO----- 15 COMPLETE, ORIGINAL NEWSPAPERs, the New York Times (NY) dated in May and June, 1865 with spectacular day by day coverage of the trial of the Lincoln assassination conspirators, inlcuding Mary Surratt, the first woman executed by the U. Secretary of War Edwin Stanton favored a quick military trial and execution. According to Secretary of Navy Gideon Welles, who favored trial in a civilian court, Stanton said it was intention that the criminals should be tried and executed before President Lincoln was buried.

Lincoln was buried on May 4, before the start of the conspiracy trial. Edward Bates, Lincoln's former attorney general, was among those objecting to a military trial, believing such an approach to be unconstitutional. Understanding the use of a military commission to try civilians to be controversial, President Johnson requested Attorney General James Speed to prepare an opinion on the legality of such a trial. Not surprisingly, Speed concluded in his opinion that use of a military court would be proper. Speed reasoned that an attack on the commander-in-chief before the full cessation of the rebellion constituted an act of war against the United States, making the War Department the appropriate body to control the proceedings.

While debates continued in the Johnson Administration as to how to proceed with the alleged conspirators, the prisoners were kept under close wraps at two locations. Samuel Mudd first were jailed at the Old Capitol Prison, while the other six were imprisoned on the ironclad vessels Montauk and Saugus. Later, as their trial date approached, authorities confined prisoners to separate cells in the Old Arsenal Penitentiary. Four of the male prisoners (Herold, Powell, Spangler, and Atzerodt) were shackled to balls and chains, with their hands held in place by an inflexible iron bar. Most strikingly, from the time of their arrest until midway through their trial, all the prisoners except Mary Surratt and Dr.

Mudd--under orders from Secretary Stanton--were forced to wear canvas hoods that covered the entire head and face. This listing includes 15 complete entire original newspapers, NOT just a clipping or a page of them. Every item we sell is an original newspaper printed on the date indicated at the beginning of its description. This is truly SIX CENTURIES OF HISTORY that YOU CAN OWN! Goldman is a consultant to the Freedom Forum Newseum and a member of the American Antiquarian Society.

Let our 45+ years of experience work for YOU! We have hundreds of thousands of historical newspapers (and their very early precursors) for sale. The item "15 1865 NY Times Civil War newspapers w LINCOLN ASSASSINATION CONSPIRATORS TRIAL" is in sale since Tuesday, October 8, 2019. This item is in the category "Collectibles\Militaria\Civil War (1861-65)\Original Period Items\Newspapers". The seller is "qrst" and is located in Oxford, Maryland.