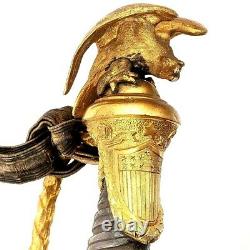 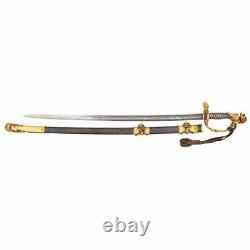 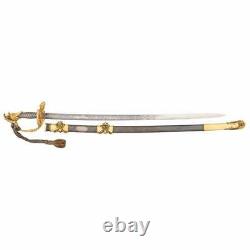 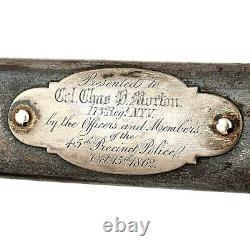 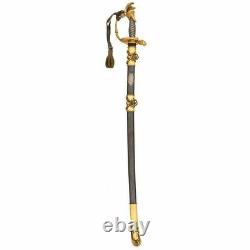 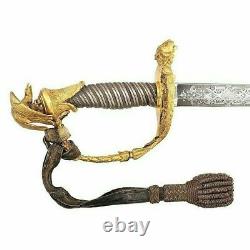 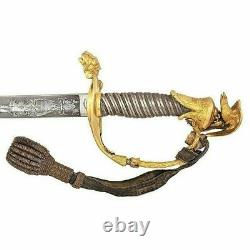 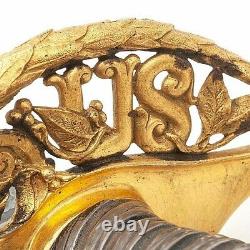 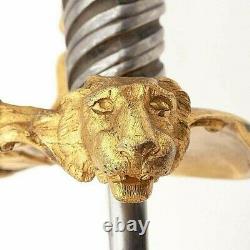 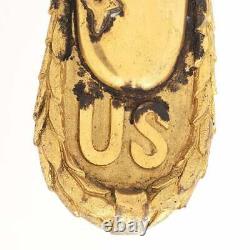 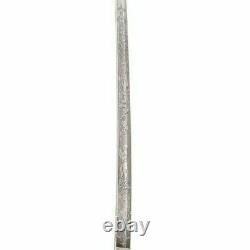 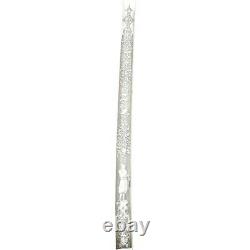 173rd New York Infantry Regiment. Pearpoint blade with 21.75" median fuller, 1.25" wide at ricasso. Blade finely etched and engraved throughout with elegant floral motifs and panoplies of arms complimented by a full-figure armed zouave on the obverse and a warrior in classical habit on the reverse. Address stands against the frosted background in a detailed foliate panel. Obverse ricasso shows three-line COLLINS & Co.

The single-branch brass hilt has been skillfully formed into classical depictions of leathers and vines intertwining the bold "US" on the guard, with the single quillon taking on the form of a lion's head. A gilt B rass Eagle posed in a guarded stance surmounts the pommel, consisting of an American shield draped in finery leading to a well-formed silver grip. The blued steel scabbard shows gilt brass en suite, consisting of American shields with celebratory classical drapery, with the top fixture showing the coveted "TIFFANY & CO/M" in a ribband. Silver presentation plaque upon the scabbard reads in script: Presented to/COL.

CHAS B Morton/173rd Regt N. V/by the Officers and Members/of the/45th Precinct Police/Oct. Prior to his appointment as Colonel of the 173rd Regiment, Morton served as a 1st Lieutenant in Company "H" of the 13th New York State Militia, signing on for three months service. When the call came from President Abraham Lincoln for more regiments, Morton once again offered his service and was appointed Colonel of the 173rd Regiment, made up of policemen from Brooklyn and throughout New York. The regiment left New York for New Orleans in early December, 1862, and served in that area throughout the war including the Battle of Fort Bisland and the Siege of Port Hudson, where it sustained heavy casualties.

It was deployed further in the failed Red River Campaign under General Nathaniel P. Banks, fighting in the Battle of Sabine Crossroads. Being transferred North, the Regiment saw further action under General Philip Sheridan during the Shenandoah Campaign of 1864. In that campaign they saw duty as train guards and supply support until the end of the war, after which they participated in the Grand Review in May, 1865.

They were later transferred to Savannah, Georgia, until October of that year. During their service the regiment lost 175 officers and men, including 6 officers and 38 enlisted men killed in action. He is buried in Graham Cemetery in Madison County, New York alongside his wide, Lucinda. Included with this lot is a large collection of reproduced documents concerning Colonel Morton's service including his commission appointment, enlistment records, and pension application. Blade is bright and retains excellent detail to etchings.