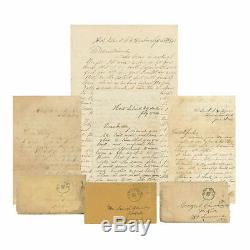 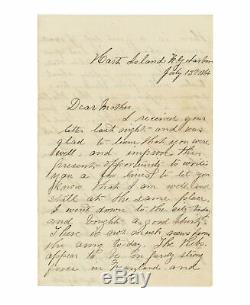 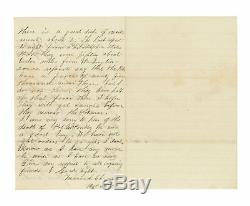 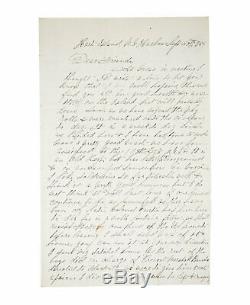 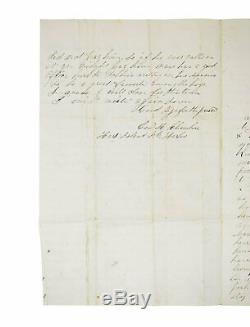 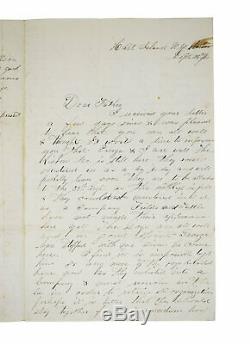 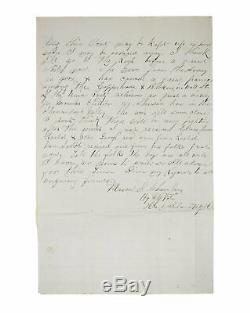 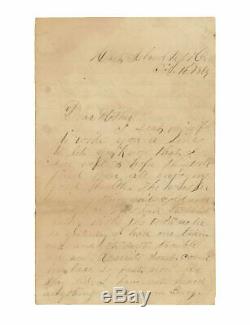 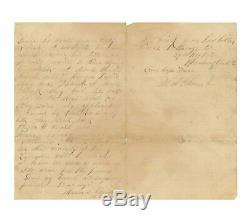 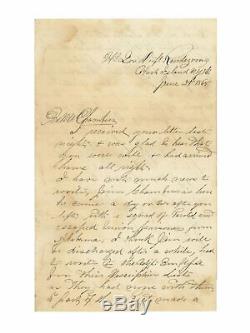 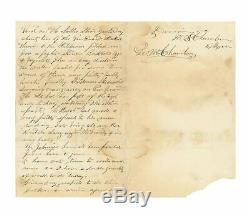 A group of four letters written from Hart Island in New York Harbor by Private Mason S. Chambers of the 169th New York. Chambers had been detailed to Hart Island for an unspecified reason, but evidence in the letter suggests he performed an administrative function in the camp.

The Island was a mustering camp for units bound for the front, and in late 1864 it was used as a camp for Confederate prisoners. In the letters, Chambers discusses activities at the camp and news of the war. Of Confederate General Jubal Earlys advance on Washington in July 1864, Chambers writes in the first letter that some reports say the Rebs have a force of seventy-five thousand men in Maryland, but I do not think they have half of that force there. He acknowledges the death of another member of the 169th, Corporal Patrick McConkey , who was killed June 30 at Petersburg.

The letter measures about 5 x 7 3/4 and is in very good condition with light toning. Includes the original postal cover with stamp removed. The second letter, written in late September, is unique in that Chambers wrote to his parents on one part of the sheet, and then while he was away his brother, Private George M.

Chambers , wrote a letter of his own on the other part of the sheet. George Chambers happened to be in the camp as he prepared to join the 39th New York at the front. Chambers writes of men joining the 39th and 185th New York Regiments. He expected to return to his regiment before long. The news from the Army is good & has caused a great panic among the Copperheads & Brokers on Wall St. He wrote, adding If the Union Party achieves as great a victory in [the] November election as Sheridan has in the Shenandoah Valley , the war will soon close. His brother George wrote about his preparations to go to the front. We have been assigned to the 39th Regt N. It is an old Regt, but has largely been reorganized & is encamped somewhere in Virginia. George added that he liked soldiering so far tolerable well & think it a pretty good business, but I do not think it will last long if our Generals continue to be as successful as they have been of late. This letter measures about 8 x 12 1/2 and is in very good condition with light toning. The third letter was written two weeks later, on October 16. Chambers informed his parents that he hadnt heard from his brother since George had arrived at City Point in Virginia. I dont know how much longer I will stay here, he wrote, seemingly wishing to return to the 169th. He continued, I dont think they will let me go to the Regt now as they sent an application signed by Butler & Birney, but they sent back word that I could not be spared. The 169th belonged to General David Birneys Corps in General Benjamin Butlers Army of the James, but Chambers services were much needed on Hart Island, evidently. He closed this letter noting that There is considerable excitement about [the] election in this vicinity.

I think that Lincoln will be elected. The letter is in fair condition with uneven toning and minor soiling. It measures about 5 x 8 and includes the original postal cover with stamp removed. The fourth letter was written several months later, in June 1865, after the camp was converted to house Confederate prisoners.

Chambers wrote that another relative, Jim Chambers, had arrived at the camp with a squad of paroled and escaped Union prisoners from Alabama. He then described a brawl that took place between German men of the 7th New York Regiment and the provost guard after the 7th Regt. Made a Raid on the Sutler Store. Projectiles including stones, bricks, bats, eggs, & bayonets flew in every direction before finally the Dutchmen skedaddled, swearing vengeance on the provost. Of the Confederates held at the camp, Chambers wrote The Johnnies have all been paroled from here & gone.

The letter is in excellent condition with light foxing and toning. It measures about 5 x 8 and includes the original postal cover, again with the stamp removed. Full transcripts of each letter follows. I went down to the city today and bought a good shirt. There is not much news from the army today. The Rebs appear to be in pretty strong force in Maryland and there is a great deal of excitement about it. The last report tonight from Philadelphia states that they were fighting about twelve miles from Washington. Some reports say that the Rebs have a force of seventy-five thousand men there, but I do not think they have half of that force there. I hope they will get caught before they recross the Potomac.

I was very sorry to hear of the death of Pat McConkey. He was a good boy. We have not got orders to go yet. I dont know as I have any more to write as I have no news. Give my respects to all enquiring friends.

The second letter, written by Chambers and his brother, George M. Chambers of the 39th New York. I received your letter a few days since & was pleased to hear that you were all well & though Id write a line to inform you that George & I are well. They were mustered in as a Co. Today and will probably leave soon. They are to be attached to the 39th Regt, as the 185th Regt is full & they could not be mustered into it as a company.

Fields and Tuttle have not made their appearance here yet. The Boys are all well and in good spirits.

George has stopped with me since he come here. I find it is impossible to get him or any more of the boys detailed here now as they enlisted into a Company & must remain in the Co. In order to retain its organization. Perhaps it is better that they should stay together for it is uncertain how long this Post may be kept up or how soon I may be ordered away.

I think Ill go to the Regt before a great while now. If the Union Party achieves as great a victory in [the] November election as Sheridan has in the Shenandoah Valley, the war will soon close.

I dont think there will be any fighting after this winter. I just received letters from Rachel & John.

George recd one from Rachel. Dan Sanith received one from his folks just now. Tell the folks the boys are all well. I have no news to write so Ill close for this time. Give my regards to al enquiring friends.

We are still on this island but will probably leave soon as we have signed the pay rolls & were mustered into the company today. It is a week today since we landed here & I have had time to make Mase a pretty good visit. I like soldiering so far tolerable well & think it a pretty good business, but I do not think it will last long if our Generals continue to be as successful as they have been of late.

Colonel Curtis has been here today. He is a noble looking fellow. Before leaving I shall send part of it home. You can use it at your own discretion. I sent my satchel home as the rest of the boys did in charge of the Provost Marshal Benedict directed to Flackville.

We were to give him 50 cts apiece. I did not see him when he left & consequently did not pay him, so if he ever calls on it you might pay him. Mase has a good office here to do his writing in. He seems to be a great favorite among the boys I guess. I will close for this time.

I will write again soon. Good Bye for the present. The weather here is getting quite cold and windy & I have been troubled lately with the tooth ache. So yesterday I had one taken out and it dont trouble me now. Recruits dont come in here so fast now as they did.

I have not heard anything more from George since he wrote you from City Point. I wrote to him and sent him his letters &c. I will write to him again tonight. I dont know how much longer I will stay here, though I dont think they will let me go to the Regt now as they sent an application signed by Butler & Birney, but they sent back word that I could not be spared. There is considerable excitement about [the] election in this vicinity.

I have no news to write so Ill close for the present. Give my love to all enquiring friends.

I think you had better direct to George to. I received your letter last night & was glad to hear that you were well & had arrived home all right. I have not much news to write.

He came a day or two after you left; with a squad of paroled and escaped Union prisoners from Alabama. I think Jim will be discharged after a while. Had to write to the Adjt. For their Descriptive Lists as they had none with them. A part of the 7th Regt. Made a Raid on the Sutler Store yesterday. About ten of the Pro. Guard attacked them & the Dutchmen pitched in for a fight.

Stones, bricks, bats, eggs, & bayonets flew in every direction. The melee lasted for some time. Some of them were pretty badly hurt. Finally [the] Dutchmen skedaddled, swearing vengeance on Pro.

Has kept off the [illegible] today, watering the other parts. Made a very pithy speech to his men today, but being all in the Dutch language the beauty of it was lost. The Johnnies have all been paroled from here & gone.

I have not time to write much now as I have a double quantity of work to do today. Give my respects to all the folks, & write again soon. Please see my other items for more interesting Civil War letters, documents, and images. The item "4 Civil War Letters by Private Mason S. Chambers, 169th New York Hart Island" is in sale since Thursday, November 14, 2019.