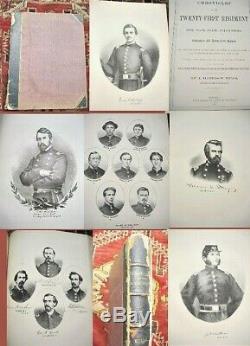 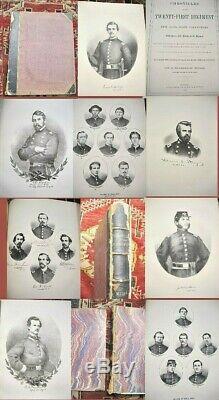 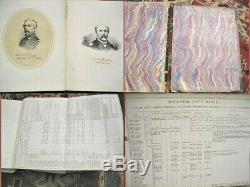 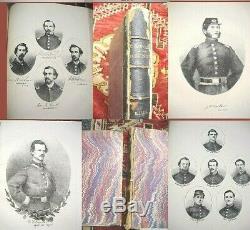 DESCRIPTION: Extremely rare hardcover book--old and original--Published in 1867. CHRONICLES OF THE TWENTY-FIRST REGIMENT--NEW YORK STATE VOLUNTEERS. Embracing a Full History of the Regiment--From the Enrolling of the First Volunteer in BUFFALO, April 15, 1861, to the final mustering out , May 18, 1863.-Including a copy of MUSTER OUT ROLLS of Field and Staff, and each company.

ILLUSTRATED WITH ORIGINAL PORTRAITS AND SCENES FROM CAMP AND FIELD. Harrison Mills--a DISABLED SOLDIER OF THE REGIMENT.

Buffalo, Published by John M. Rogers, was accepted by the State for a service of two years, and numerically designated May 13, 1861; organized at Elmira, and there mustered in the service of the United States for three months, May 20, 1861. Members of the 65th and 74th Militia, four companies of the latter, formed the nucleus of the regiment. At the request of the general government, the Governor of the State, August 2, 1861, ordered the regiment in the service of the United States for the unexpired portion of its term of State service. The men were recruited principally in the county of Erie; a few coming from the counties of Allegany, Chautauqua, Niagara, Orleans, Oswego and Wyoming.

Table of contents pages have detailed listings of topics in each chapter. Book is complete--Includes many MUSTER OUT ROLLS that fold out, as seen in pic. Covers are as is--detached from book, but all here.

Spine has wear, with outer leather partially flaked off. End papers are loose in front, and have some edge tatters. One muster roll foldout is separated at fold. 9 x 11 3/4---294 pages + appendix containing foldouts.

EXTREMELY RARE volume on a specific CW Regiment from Buffalo NY. GUARANTEE: All of our merchandise is guaranteed to be genuine, old and vintage as describe. We DO appreciate your business. The item "1867 Civil War 21st Reg. New York Volunteers Book-Many Soldier Illus- Buffalo NY" is in sale since Sunday, April 26, 2020.

This item is in the category "Collectibles\Militaria\Civil War (1861-65)\Books". The seller is "cfila" and is located in Buffalo, New York. This item can be shipped to United States, Canada, United Kingdom, Denmark, Czech republic, Finland, Sweden, France, Netherlands, Germany, Switzerland, Norway.