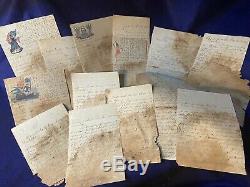 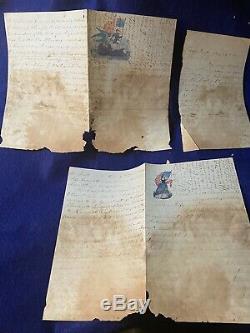 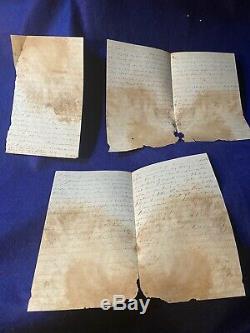 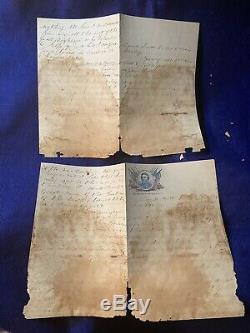 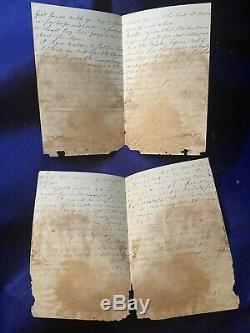 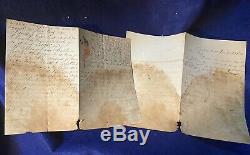 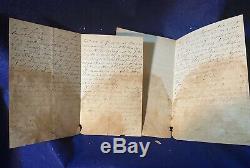 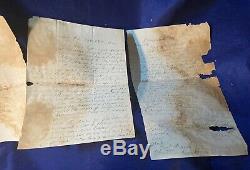 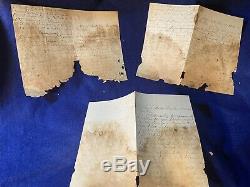 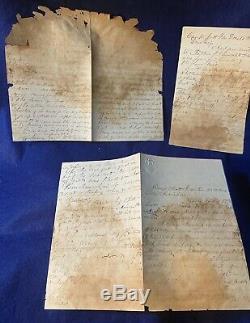 (scale 1-10) 1.5 - 2.5 - Pages are in varying states of. Damaged from exposure to different degrees; all have small to large areas which are unreadable or barely readable (with UV light or other). + tears & holes at folds & edges throughout; bends, edge wear, age discoloration, smudges, dirt, and marks. PLEASE see the photos for the most accurate, objective description of the condition. LETTERS WERE PULLED FROM AN OLD WORN BOX FROM SHELVING IN BARN LOCATED IN SOUTHERN VIRGINIA. This cursive handwriting is fairly clear where it can be read and not terribly challenging; these period letters are often difficult to read, but given a small time investment, you can get used to translating most CW letters. I will do the best I can below to translate, but please understand unintentional errors and/or corrected spelling & punctuation. I did not try to read or translate these letters.

There is still much to uncover. 8/26/1861 Camp Scott Well it may be so but I can say to the Ladies & the Patriotic Boys should these be any that it is a good place down here to. > off this Patriotism & courage & I would. Advise any Boys who are inclined to puff & blow about the.

To come straight down here. & try the matter on.

9/6/1861 Camp Scott they do die when in 9 cases out of 10 if they would give them a furlough home they might by the time they would be ready for their coffins here be ready to return to the ranks & do duty. > about the mind of a Sergeant. Who said if a Revolutionary Soldier was to rise from the dead & tell him that. I think he will not care to make any trouble.

Mitchell was as good a Soldier as they could scare up in the 38. Be that as it may he does his duty promptly & has not yet been under arrest nor. 10/17/1861 Camp Scott I will try to get a recruiting furlough. 10/21/1861 Camp Scott Sending letters thru a friend going home on a furlough. I sent my coat by him as I thought I should not. > it any more this Fall. The letters are in my coat pocket. We are having plenty of hard drills now as they drill us most every day with knapsacks for I suppose they intend to march on the Rebels. 11/7/1861 Camp Scott Family matters & will get his picture taken. 11/24/1861 Camp Scott We had a Grand Review the other day out at. > Cross roads & I can assure you as you have been informed no doubt in print. > that it was worth seeing. Yes Sis to see men enough to cover in mass a square mile is no small sight to say nothing of the Sea of Bayonets which added splendor to the scene, besides we love all the great men of the Nation Jeff Davis excepted of course, & we would have been glad to welcome him upon the stage & attended him with the Hangmans Rope.

12/15/1861 Camp Scott Still trying to get a furlough. No date Camp Scott By the way lest I forget it Bill Beach came over to see us the other day he looks quite like a man in his military suit; never saw him so well dressed before in my life. He is the same Boy. Oh & the stories he tells about his meeting the Rebels.

Duty in the Defences of Washington, D. Battle of Bull Run, Va. Ordered to the Peninsula, Va.

Regiment lost during service 3 Officers and 72 Enlisted men killed and mortally wounded and 3 Officers and 39 Enlisted men by disease. Please ask if you'd like any additional information on entries or more photos. My goal is your satisfaction! The item "15 Civil War Soldier Letters Lot, 38th Reg NY Grand Review Drills Poor Cond" is in sale since Thursday, May 21, 2020.

This item is in the category "Collectibles\Militaria\Civil War (1861-65)\Original Period Items\Correspondence, Mail". The seller is "senft" and is located in Hanover, Pennsylvania. This item can be shipped to United States.